Cage Warriors turns 20 and asks GBTT to help celebrate in style at the indigo! 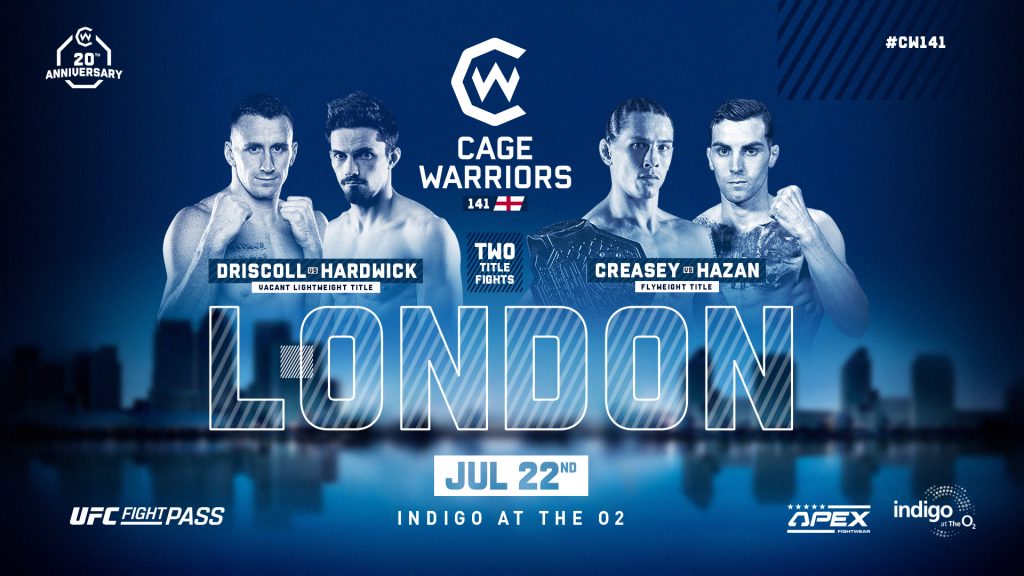 July just keeps on delivering, we have barely had time to catch our breath,  but we are not even remotely near done with this month’s entertainment!

Cage Warriors 141 is not disappointing anyone with an absolutely stuffed to the gills card. 2 titles on the line as well as welcoming 2 old friends back into the fold with both Darren ‘The Dentist’ Stewart and ‘Judo’ Jimmy Wallhead in action, not to mention 3 GBTT fighters helping kick off the night in style!

The last time Lone’er Kavanagh (3-0) stepped foot in the cage was at CW134, and it was about as memorable as it gets with a stunning knockout against Ryan Morgan (1-1) mid-way through the 3rd round.

This time around the opponent is Ander Sanchez (1-0) who had a fantastic debut at CW135, knocking out his opponent in 30 seconds of the very first round.  Both men are looking to extend their unbeaten runs, Lone’er has been putting in the work and on July 22nd he will show once again why he is one of Cage Warrior’s hottest prospects!

Another CW134 success story is Kingsley Crawford (8-3) who put on a clinic against Aidan James (5-3), knocking him down with a brutal right hook before sinking in an Anaconda choke that left James out cold in the middle of the cage!

The opponent this time round is  Reece McEwan (4-1) who is coming off an impressive rear naked choke victory against Sam Spenser (3-1) at CW136. This fight is going to be a definite one to watch as both men have slick submission games who are not afraid to exchange. The Silent Assasin is a huge fan favorite who is looking for his 4th win in a row in front of a packed London crowd!

Last but no means least is Jeremy ‘Ninja’ Petley (14-9-1)  taking on another tough veteran Steve ‘Diddy Kong’ Aimable (17-8-1) who is on a 3-fight win streak, but if anyone can get the job done it’s the Ninja. I first saw the Canadian native take on Dyson Roberts way back when at BAMMA 10 and the fight was the definition of never give up! Look out for an incredibly fresh face Mark Goddard!

Hopefully, you will already have tickets as the event is a total sellout, but fear not as the whole event can be seen live over on Fight Pass. Prelims go live at 5:30 PM GMT with the main card kicking off at 9:00PM GMT