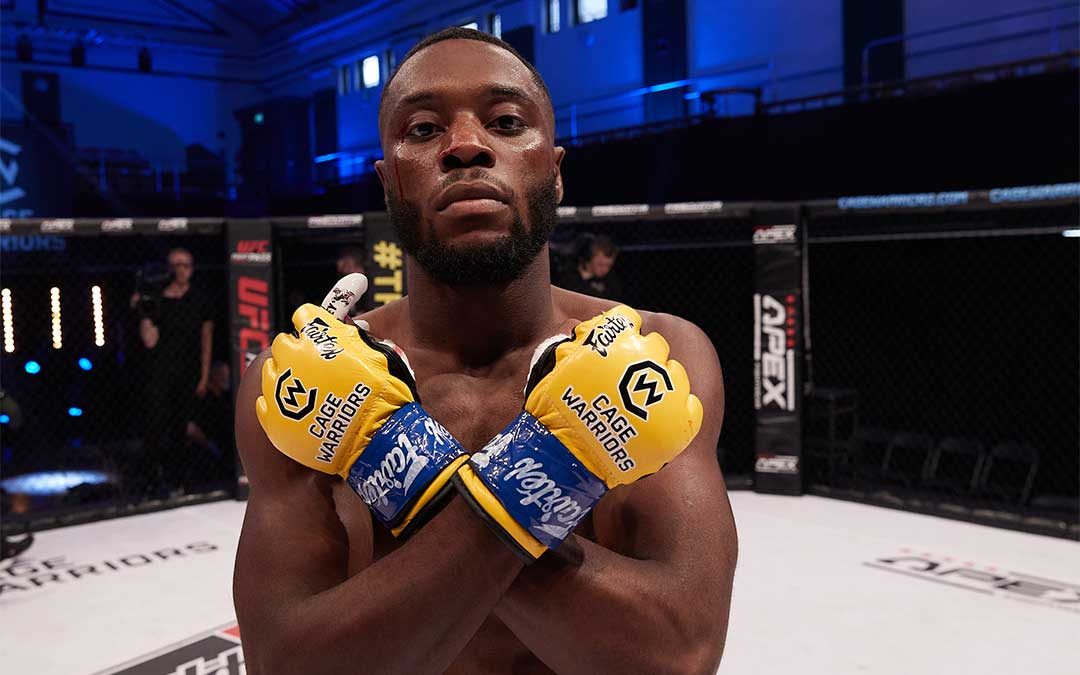 Cage Warriors 127 in London saw the vacant bantamweight title go to Dominique Wooding with a 3rd round knockout.
Wooding was trailing on points behind the undefeated submission specialist Nathan Fletcher.
Fletcher telegraphing a takedown was eliminated by Wooding’s flying knee which was the beginning of the end. An uppercut ended the flurry of domination and the referee had seen enough, calling an end to the fight.
Wooding’s coach Brad “One Punch” Pickett rushed the cage pinning Wooding to the cage and executed a slick double leg takedown. He’s still got it!

Interview with Wooding after the fight

How do you think the fight went? Was it as you thought?

“I feel like the fight went kind of how I expected it to go. I knew Nathan was going to come in grappling heavy. I knew he was going to try and get me up against the cage and press forward and try to take me down and try to work from there to get the submissions.”

“I was ready to get taken down and defend his shots and the way the fight went was the way I expected it to go.
So obviously it was a 5 round fight and obviously the way he grapples you cannot grapple like that for 5 rounds with all the lactic acid building up in your arms and obviously coming up against someone like me that’s explosive and very fast twitch, that is going to make the grappler work even harder and get them down especially when they are defending very well. I just wanted him to work himself out a bit and get him tired and from there I capitalised and saw my opportunity.
I had to be very patient and very calm and composed in different situations when he was going for his game plan. So, I had to be very calm and composed.”

Have you re-watched it yet? Anything you feel you need to work on?

“I have re-watched the fight, maybe 15 times now. I watched where I went wrong and were I made mistakes and things to improve on when I get back in the gym. And obviously re-watched it again to re-live that moment. Not a lot of people get the chance to become a World Champion in this life so it is obviously good to re-watch it and feel and re-live that movement again through watching the fight.”

Any nerves coming into the fight and how did you manage this?

“Were there any nerves going into this fight? To be honest, most fighters that get into fights have some type of nerves and feel anxious before getting in to fights, it just depends on how some fighters handle that and the pressure.”

“Of course, for me there was pressure and having good pressure makes you sharp. And obviously I have been in that situation before fighting for a world title and he hasn’t and I knew I had the edge on that. Even going in there, I could just see through his eyes, he looked like it was all new to him, the whole situation and he hasn’t been in the main event for a major title on a huge platform and I kind of sensed that. And I saw it as I looked across the cage, looking at him. As for nerves and pressure, there was good pressure but that’s what made me sharp going in there.”

Where do you go from here? What’s next?

“Obviously, I’ve just won the title, I like to be active. I spoke to Graham after the fight and he said December is the next show, and I assume I might defend my title in December. And also you never know UFC could come through, but also in a situation I have options. If other major options comes through UFC for example we shall see. So apart from UFC, I am expecting to defend my title in December!”